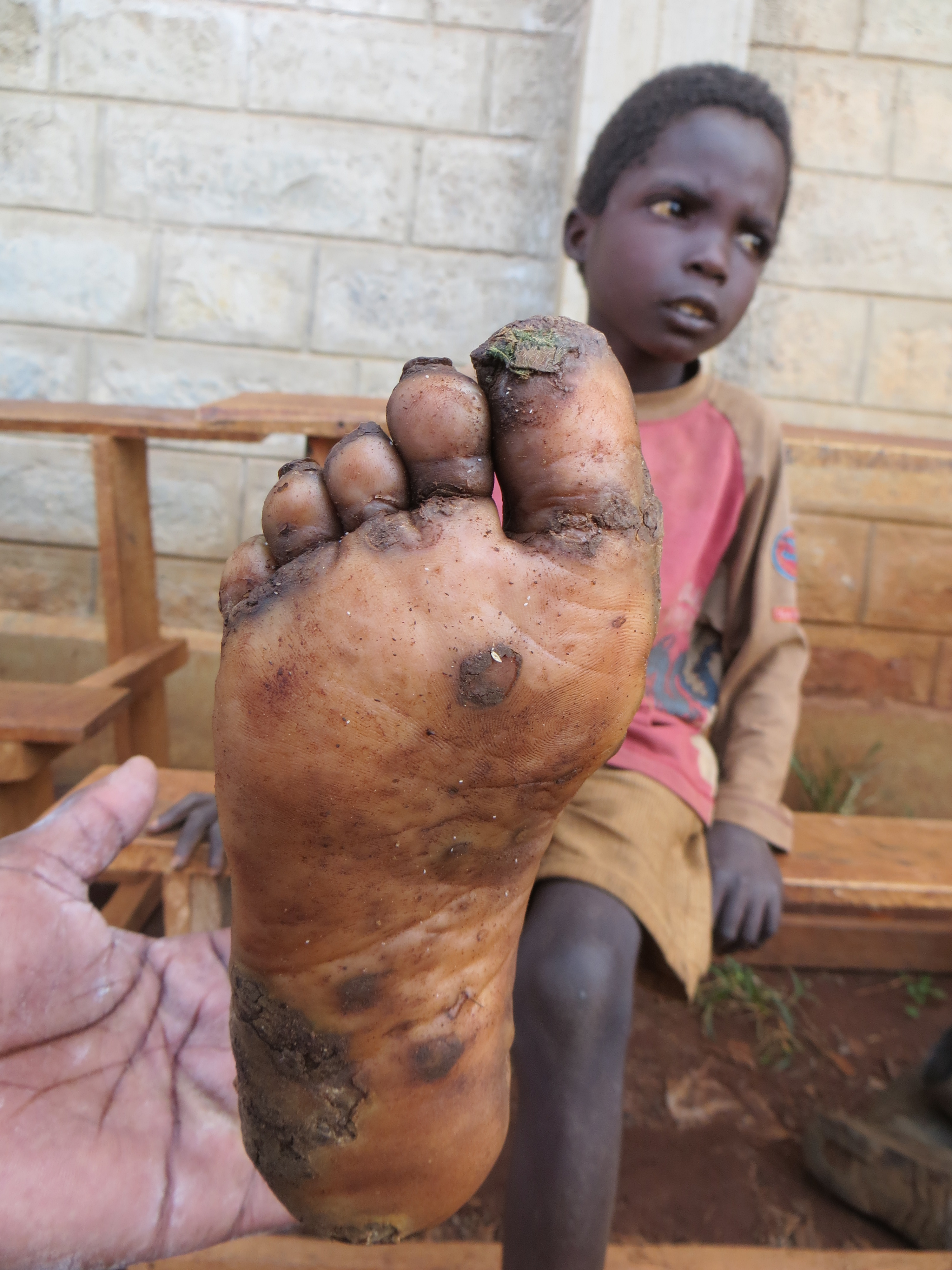 Today we would like to introduce you to two of our CBSM kids: Aisha and Fanuna. Every day, they leave their mud hut at 5 o`clock in the morning to arrive at school by 7o`clock. This makes a school way of 2 hours walking – one way!

However, walking is difficult for both of them as they have a disease called Jiggers. What sounds fun are actually mean little worms that move within your toes making them hard and stiff. It hurts so badly that they can only limp.

We accompanied them home today to see how they live and what could be done for them. Before we left, we gave them two shirts each from our donations receiving in return two big smiles.

Asha and Fanuna smiling due to new shirts

In order to save time we took a motorbike. The kids enjoyed the ride, while we experienced for the first time a squeezed “four man on one motor-bike” ride to save the 80 cents that another motorbike would have costs. Yes, 80 cents…

Squeezed on a motorbike. On our way back we managed four adults on one bike!

While we inspect the little one room mud hut with two empty Gin bottles lying around the kids change quickly into their new clothes.

The neighbors approach us and suddenly we are 20 people in a 5×4 meter hut. Most of them are wearing no shoes and within seconds we identify another 3 Jigger cases. The worms live in the mud floor and is infectious if running around barefoot. This is why it is important to wear shoes, but most of the people cannot afford to buy. In our school we have a few mothers that put cow dunk to the floor in order to prevent these worms to come up.

We get quiet on the way back and instead of heading to the school stop at a pharmacy. While we try to find out what can be done one of the customers tells us he knows someone who runs a Jigger campaign. Within 5 minutes we meet Milton, a teacher from another school. He explains that the feet needs to be cut open, the worms are removed with a needle and the houses of the infected people need to be sprayed with a special medicine.

We look at each other. Saturday is our birthday and we had planned to go to Uganda for a couple of days as the school is closed over Christmas and the construction will stop as well. We both agree that there is no better way of spending our birthday and together with our new friends we plan our Jigger-fight campaign for Saturday. We want to mobilize more people and visit all our neighboring villages to help as many people as possible.

Equipped with all the necessary medicine we agree on meeting at 8 o`clock on Saturday morning and work all day long until late. If you would like to give us a present for our birthday, please help us with our Jigger-fight campaign. With 20 Euros / CHF we can help around 20 people to treat their feet and prevent others from getting the worms.

The next morning we rise early (a grumpy Myron who remains grumpy until 2 hours after he wakes up even with the happy birthday environment around him).   So we meet up with all the volunteers, the Reverend, two of our teachers, two teachers from another school and the daughter of our cook. After a birthday mango welcome drink we start by trying to find the father of the two girls from our school so we can go to their house where we will set up camp. Everyone knows where he hangs out, the tree where all the other drunks hang out all day. He was called, and he said he was 5 minutes away but after 15 minutes he was a no show and the team of 7 mounted their 3 motor bikes (tight fit). Myron was left behind still trying to get his luggage but he quickly caught up. Along the way we found the drunk mother and her friend (also drunk). So now a reallllly tight fit on the 3 bikes. And so we rode 15 minutes up and down the hills until we got to their home.

Myron’s thoughts….When I was younger, people always said “You have it so easy. You ride to school in a school bus. When I was your age I used to walk barefoot uphill both ways to school. And as a sharp smart child (I used to be smart)I knew that was not true. You can’t walk uphill in both directions. So seeing how a child with these painful Jiggers walk 2 hours each way to school up and down hills in both ways makes me think well…….

Back to the day. When we got there at nine (Myron groggy but not grumpy) we set up camp. Various stations to wash, to cut and to remove. (Now for those faint hearted Myron included we have removed the most graphic pictures because these pictures remind Myron of the worst movies in his biology class when they were learning about parasites). We ended up treating 30 kids, one drunk adult (aka the father) and decontaminated several homes all for 30 Euros.

The process included soaking the feet for 15 minutes. Then using a double sided razor blade (Myron again turns away as memories of him cutting himself with an old straight edge shaver haunt him). However, the individuals doing the cutting had such steady hands that no issues arose. After cutting away the scarred tissue the worms were exposed and pulled out. Now for anyone who has gone in for minor surgery and remembers local anesthesia,….none here. And then complaining about the pain, here no crying from any of the kids. The longest patient, the 7 year old CBSM girl that brought us here took over 2.5 hours to cut and clean. It’s hard to discuss all the cuts and open scars but in the end she and 30 others will be better off.

We did have some fun during the day as well. Walking in the countryside trying to find more children to help, Myron attempting to play football and being schooled by a 5 year old, the smiles from the kids as we handed out cookies and then a nice cooling off rain.

Well while the cooling rain was nice it did spoil our last stop of the day, helping one family in Kimilili with Jiggers. When the birthday girls (Myron ran away to hammer in some more nails) tried to set up the same process as above the skies opened up and more rain fell in a few minutes then we have seen in a long time. It just lasted 15 minutes but the water rolled into the house and poured in from the leaking roof and our work was done for the day.

So while there were down sides to the day, (Myron really needs to shower) this was a birthday we will all remember.

Hugs from two birthday kids and one fashion trend setter

I look into the girls little eyes and silent tears run down her face. She is sitting on one of our self-made school benches in the shade surrounded by 45 other kids passing through the same pain. She and the other kids are our brave patients during our second Anti-Jigger Campaign held by our CBSM school in Kimilili. I need to fight my tears as well as I inspect her little feet and hands damaged by Jigger worms.
Feet and fingers affected by Jigger worms

I know this little girl and her sister from our first Anti-Jigger Campaign back in December. We had to operate her and her sister for 3 long hours. We bought shoes for both of them so that they would not get infected again as you get these nasty worms while running around barefoot. Both her parents are alcoholics and do not take care of their children. On top, their older sister took their new shoes away so that one of them got infected again. In the meanwhile both of them are in our orphanage where our cook Mama Beatrice takes care of them. Here is a video of that little girl (in red) trying to walk. This girl will remain with permanent damages because nobody could pay 1 Euro to remove her Jiggers early enough.

I don’t mean to shock anyone, but I am missing words for the pain these kids go through.
Cutting with blazer and removing of white Jigger worms

Even some of our Jigger experts were fighting with tears during that day: helping is not always easy!
Our school director Phylis fighting tears

Our second Anit-Jigger Campaign was a huge success. Asante sana to all CBSM staff members for volunteering and a big thank you to our donors and friends who supported and believed in us. We helped 45 childrend during a very long day and only stopped in the late afternoon when everyone received help.
We could help 45 kids during our second Jigger Campaign at CBSM School Kimilili

During the day we meet the brothers John and Abuit who are badly infected.
John and his brother Abuit are being treated by headmaster Martin and teacher Rose

We learn that their father is a very poor farmer who had to sell all his property. His wife had Jigger worms a year ago and as he could not pay for treatment her family came to pick her up. She lives only 30 minutes away by Matatu but he cannot pay the 100 KSH (90 cents) to go and bring her back. We take a motorbike (6 people on two bikes) and drive over to their place. John and Abuit show us their little mud hut in the country side including all their belongings. There is not even a little oven to prepare food!
Visiting John and Abuit in their little mud hud

While the father gets treatment I have a new job as horse (don’t dare to say I meant donkey!) and photo model while John and Abuit see for the first time the world through sun glasses and take their first pictures of their life.
Playing with two amazing little kids

The neighbor kids are too afraid to come and play with us and prefer to look from a safe distance. They are afraid of my white skin as so many other kids in Kimilili as well. But John and Abuits grandmother shows up speaking to me in Swahili. We could not understand each other, but neither her nor my hugs and smiles did need any translation…
No common language – but a mutual understanding!

We would like to inform you that School4Life has had to end its involvement with one of the local partners in Kimilili as of January 2020 due to concerns around governance and transparency. School4Life handed over the matter to the respective external authorities and is awaiting their report. The Programmes continue to run by the local partner.

If you have any questions, please feel free to reach out to info@school4life.org.

We thank you for trusting in School4Life.

With a big ASANTE SANA,
The School4Life Board Agnes, Astrid, Alex & Miriam